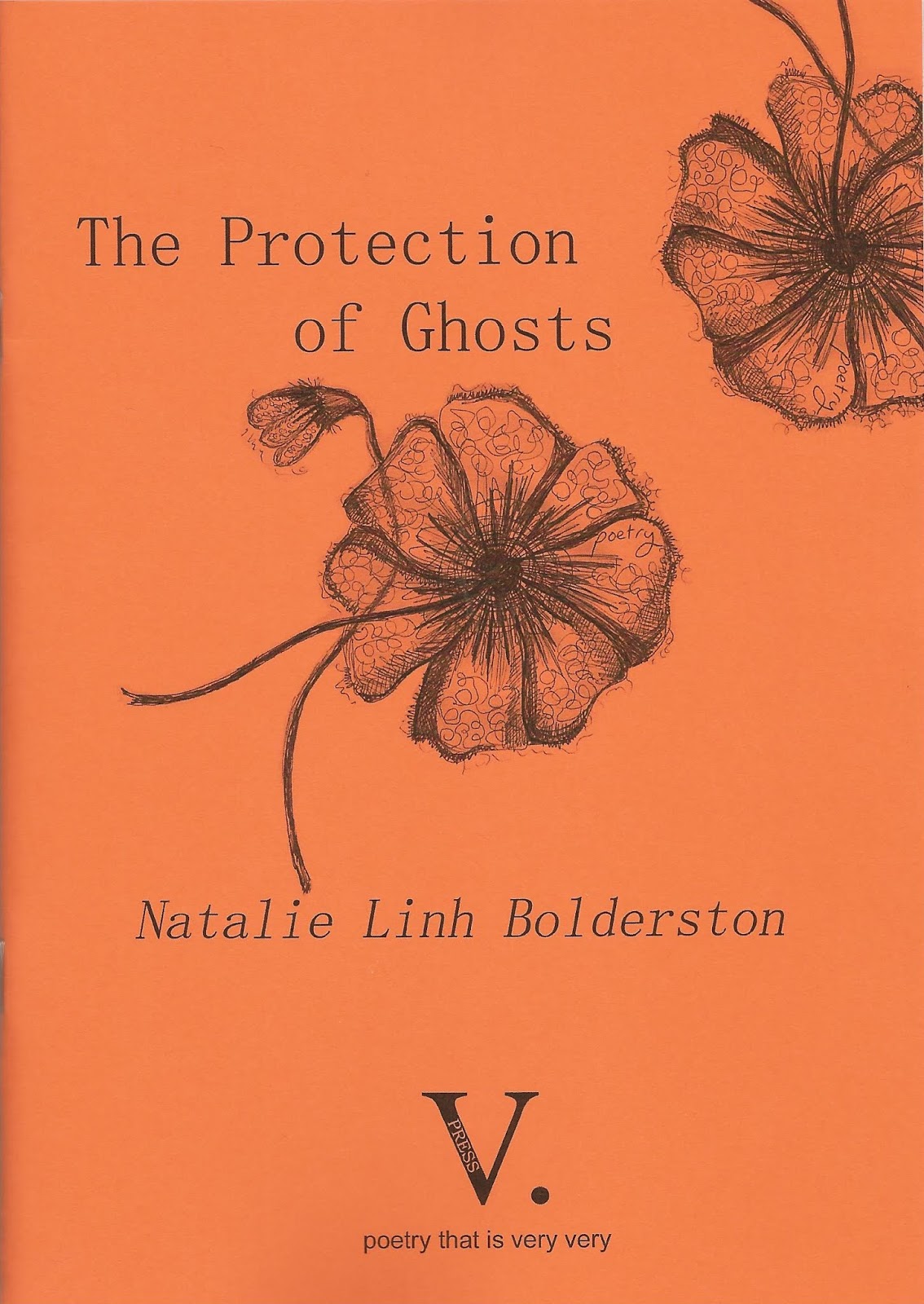 The Protection of Ghosts, by Natalie Linh Bolderston. Published by V. Press, 2019. Available for purchase here.

Natalie Linh Bolderston’s debut pamphlet, The Protection of Ghosts (V. Press, 2019), is an exquisite lyrical exploration of the question: what does it mean to live as plurality? It examines how our identities are impacted not only by the stories we inherit, but in how they are told and retold, how they bloom and how they rupture—what they capture and what, despite our very best efforts, will always elude us.

Although ghosts metaphorically accrue meaning, wandering through imagined worlds that stretch infinitely, it is this complexity of plurality I am most interested in. The ghosts are visualised as inherited truths and inherited gaps (both, I feel, are inheritances which we must acknowledge and protect). They embody what lineage can bridge, and what the distance between generations can never realise. The ghost as its most literal definition: liminal, real and unreal at once, somehow both otherworldly and yet, rooted forever in our physical selves.

It is the richness of this interplay between instance and imagination that makes The Protection of Ghosts so compelling. Multiplicity is both metaphorically and imagistically examined. We see this in ‘Reflection,’ a poem where the title itself evokes versions and echoes. In this poem, reflection is portrayed first in language, in how two phrases become mirror images of one another:

How when she said tôi mạnh,
she meant forgive me

And then, more broadly, the reflections of a mother and daughter:

Years later, she erases
her name from mine.
Asks if I remembered to pinch

my nose that morning,
as if I could exile her
from my face

Here, multiplicity is what is passed down, what is visible, and what a mother might attempt to erase, or exile. Bolderston’s choice to craft this poem, among others in her pamphlet, as a sequence is in itself a reflection of how in between articulated moments or experiences, there may also exist leaps, gaps and erasures.

There are also poems like ‘Bà Ngoại,’ a portrait of a grandmother that reiterates, most concretely, present occurrences. It depicts Bà Ngoại through a granddaughter’s eyes, using precise and seemingly literal exchanges. These poems anchor us as we journey through what is remembered and fictionalised: ghosts that wander elsewhere in the pages, like ‘the ghosts of longans’ (‘I watch my mother peel longan fruits’) or the ghosts of memories that ‘bristle, snap / at our hands when we try to latch on’ (‘When Bà Ngoại tells stories’).

And, just as The Protection of Ghosts is all together placed and placeless, it also hangs within the balance of the passage of time and moments of timelessness. For example, ‘Divinations on Survival’ uses the I-Ching form, created by K. Ming Chang, and can be read from the first line down, or the last line up. Complicating our sense of linearity, the poem traverses the boundaries of memory.

we left rain laced with tiny                gods, slack-skinned sun
like a cooked fruit unravelling across sea. in sagging boats,
we spent nights learning every word for sorry, my body
blue with exile…

With no absolute beginning or end, the section titled ‘夬 Guài [displacement, parting]’ is suspended in its own imagination, its own temporality. This poem parallels how stories are told from one generation to the next, how memory is often inherited: as nonlinear threads, or as Bolderston writes, ‘tuberous, / bloated with other stories, aching / to split their skins -’ (‘When Bà Ngoại tells stories’).

And, although the form is directed by the hexagram, Guài, the poem’s gaps of blank space cause the narrative to fragment and divide. The form, again, defines the poem as displacement and parting, as if simultaneously allowing the speaker a moment to recollect the account, and the poet to illustrate what might be lost in recollection.

I relate deeply with the themes apparent in Bolderston’s pamphlet, and so, feel drawn to those poems which articulate strands of identity. But Bolderston’s poems surge into the universal, particularly in those vibrant instances where the landscape becomes alive and almost animalistic—

‘and slavering / the sky lunges.’ (‘Typhoon in Xiamen’)
‘And just like that, the trees fold around them.’ (‘Operation Ranch Hand’)
‘The branches of a plum tree become her father’s arms…’ (‘My Mother’s Nightmares’)
‘the mountain glowers, / remembers everything.’ (‘Hạ Long Bay’)

These moments of active landscape act as a hinge. Both real and invented, the natural world connects the literal to memory. Whether an imagined homeland, a retelling of myth, or a figurative representation of trauma, through their liveliness and agency, through her powerful construction of imagery, the worlds inhabited by Bolderston’s poems become defined and true for the reader, whatever their own experience.

In The Protection of Ghosts, there are the reflections of reflections, the shadows of shadows, the grandmothers of grandmothers—even the ghosts of ghosts. And yet, somehow, among all those questions, all the stories which may never be fully graspable, there is an answer, too. A kind of belonging that follows the lyrical assertion of selves. A poetic landscape that transforms every familial utterance into a welcome.

Alycia Pirmohamed is currently a Ph.D. student at the University of Edinburgh. Her forthcoming chapbook, Faces that Fled the Wind, was selected by Camille Rankine for the 2018 BOAAT Press Chapbook Prize, and she is a previous winner of the 92Y/Discovery Poetry Contest, Ploughshares’ Emerging Writer’s Contest in poetry, Adroit Djanikian Scholar’s program, and Gulf Coast Prize in poetry. Alycia received an M.F.A. from the University of Oregon.