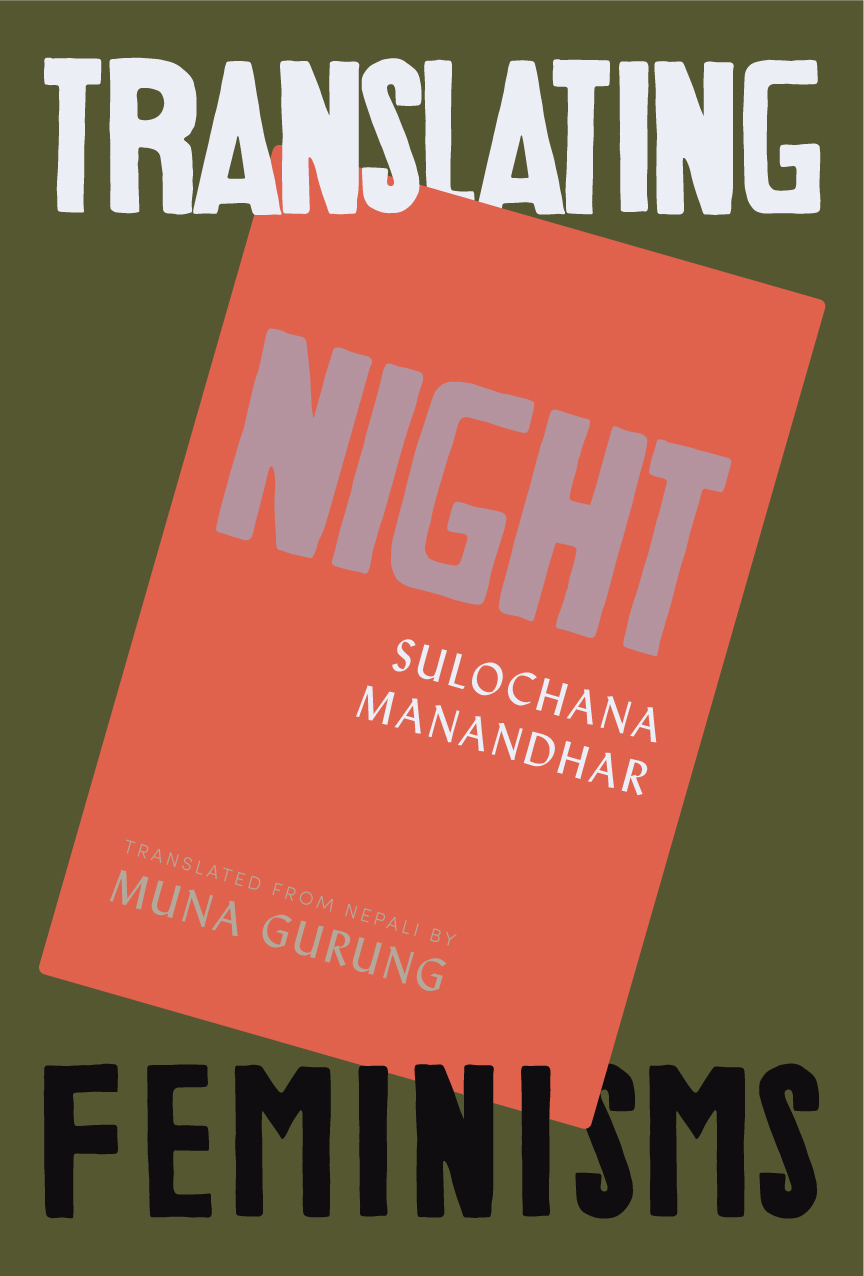 When I had finished reading Sulochana Manandhar’s Night (Tilted Axis, 2019), these were the first words that came to mind. This chapbook of just twenty-five poems – a small incarnation of the original sixty, translated and chosen by Muna Gurung – reads as a fervent retelling of the Night Time against its assumed danger and darkness.

An assumption that comes to hold very little weight by the end.
A retelling that feels tangible and light and reparative from start to finish.

Do not complain about darkness, instead
light a light
Do not run away from night, instead
become night’s friend

This encouragement (largely to women) to renounce the fear of Night forms the overarching theme in this body of work, and never seems to lose its power. In her author’s note, Manandhar states that ‘many see night as a symbol of darkness’. Indeed, we have done the Night an unfortunate disservice in allowing our imaginations to believe that it holds all danger, a belief that has spilled into creative and cultural narratives around the word. From our imaginations we have spawned yet another place that is unsafe for women and one more limitation on their relationship with time and the natural world, themes which reoccur throughout Night. The Night Time, which was created for us to rest, has instead come to be understood as a place of fearful unrest. Manandhar’s words become all the more compelling because they displace the Night from its assumed sense of inevitable danger.

In the first line of the first poem, ‘Wings’, Manandhar writes:

I wear them
out into a world
I’ve created

roaming any which way

Such an intimate opening had me repeating and emphasising the word ‘softly’ each time I read this poem. I am not a Nepali speaker, so I cannot comment on translation from Nepali to English, but with my (now retired) background in interpreting I found myself heavily drawn to precisely this softness of language in the poems. This, of course, is a testament to both Muna Gurung’s translation and Sulochana Manandhar’s own(ed) words. Such a description of the Night might usually draw us into a generically romantic, heteronormative setting – a man, a woman and a clandestine love affair under moonlight – but in ‘Wings’ Manandhar creates a space for her speaker not only to be alone and safe at Night Time, but also to shape the terrain. If women’s worlds have been shaped by imagery and experience that make us fear the Night then Manandhar’s words create another world, which radically imagines the future she wants to live in and brings it into the present because, after all, the future is now. In this world, women have a deep sense of control, creativity and agency in their lives, in part because they no longer have a reason to fear the Night.

In this new present, the Night is a carrier of knowledge but there is nothing to be afraid of in not knowing what it holds. The Night Time is inviting but not persistent, it is mysterious but not coercive.

what else
are you trying to bring to life?’

The Night has nothing to hide but so much to reveal.

Of course, neither Manandhar nor I are disputing that dangerous things happen – at Night – to women. But instead of leaning into the ways that Night has come to be associated with threat or violence, Manandhar reveals to us its infinite potential, when we refuse to fear it.

These poems remind me very much of the work of the Basque poet Ángela Figuera Aymerich, in that both poets resist assumptions that, under patriarchy, women’s only redeeming and fulfilling relationship can be with men. Both poets reclaim their relationship with Night/Time/Nature as a return to a state of being that always was and then was taken away, by patriarchy, by colonialism, by usurpation.

In ‘Property’, Manandhar views this relationship as ‘my ancestral inheritance, my birth right’, much like Figuera Aymerich’s claims. If the fear of Night is inherently tied to the fear of patriarchy and vice versa, then their re(new)ed relationship with the Natural World – which came before their relationship with men – is therefore the purest, safest and most equitable relationship and will therefore release them from their fears. Of course, there are differences between the poets’ work too – where Figuera Aymerich writes as a literal embodiment of the Earth, Manandhar’s speaker and her Night remain distinct but wholly equal entities in relation to each other.

This relationality is alluded to further on in ‘Property’ in the lines:

Shall I cover myself with it or lie on it?
Shall I look upon it as a mirror or a field?
Shall I keep I in my heart or scatter it?
Shall I surrender to night’s embrace
or play with it until I’m sated?

Here, Manandhar questions the ways she should navigate her relationship with the Night, while noting that she has her own agency within it. The most striking line is the second one; women have often been seen as a reflection as of men, but here Manandhar’s use of a question indicates that she is not simply replacing this dynamic with another but destroying it altogether. What I mean by this is that the poem does not suggest that in renouncing patriarchy and fear the speaker becomes a reflection of Night/Time/Nature instead, but rather that her questioning reveals her agency to reflect on and define her relations.

Further, if the speaker has agency, then so too does Night because they are linked to one another. For example, the final question in the quotation above not only suggests Manadhar’s sexual agency but in doing so also turns Night into a lover. Throughout the chapbook Night is variously described as ‘a guide’, ‘a support’, ‘a guardian’, ‘a guru’, and ‘an expectant mother’; it is an entity that gives birth to Manandhar’s speaker, allows her to rest, renew, renounce fear and in doing so helps her navigate ‘the injustices of the day’.

The Night is freed from its restricting tie to danger – and Manandhar is in the process freed from her tie to patriarchy.

Although specific ‘injustices’ are never made explicit in these poems, we can – of course – imagine. What is made clear is how they make the author feel, beyond the Night: small, even invisible.

When night fades into day
Where will I see myself?

Like the speaker and the Night, the Night and the Day are intimately connected to each other; in unbinding herself from fear of the one, the speaker naturally becomes less afraid of the other.

Night is moving towards the light
and I, too, am brightening

History is where changes happen, but language is where they are fixed in place. Somewhere, at some point in time, Night was damagingly written into history as a violent and dark place and perhaps, not far from this moment, women were fixed into their places too. Before this, and after, we might otherwise imagine a relationship unstrained and untouched by imagination, assumption or fear. So, it is fitting that Manandhar, who sees her feminism as closely related to ‘social justice and equality’, would take it upon herself to redirect history, by rewriting this injustice brought upon the Night Time and in turn beginning the process of restoring its relationship with women. Finally, delicate is another word that comes to mind when reading through this body of work. And, perhaps, it is in Sulochana Manandhar’s delicate act of sharing her journey of healing with the Night with us as readers that we – like her – can become a little less fearful. It is in this becoming that we learn a little bit more about what it means to reclaim.

Radha Patel is a Cardiff based / Wales born writer, whose work intersects across colonialism, nature, religion and the future. She enjoys writing as a way to challenge historical perceptions of right / wrong / this happened / that happened. You can find her on twitter @radha_sophia