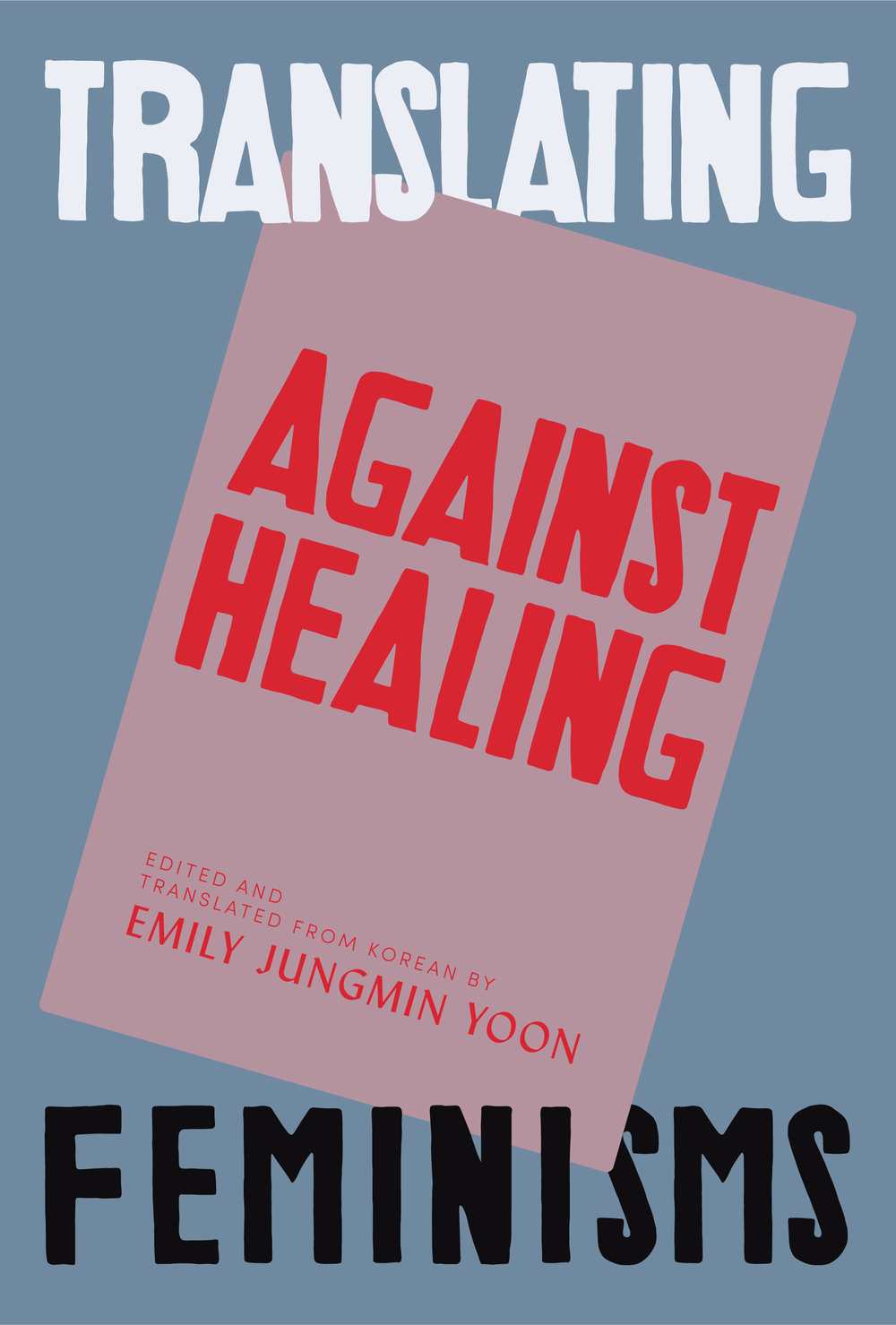 ‘What would happen if one woman told the truth about her life? / The world would split open.’ Poet and translator Emily Jungmin Yoon quotes this line of poetry by Muriel Rukeyser in her introduction to Against Healing: Nine Korean Poets (Tilted Axis, 2019). I feel the world splitting open quietly, almost imperceptibly, as I re-read Kim Seon-U’s poem ‘Time for Boiling Eggs’ while eating my own breakfast, alone, of a soft-boiled egg and two pieces of toast.

(Mom likes them soft boiled) Fill the pot with
water, place the eggs in, and turn on the gas
Inside the pure chewy whites, the yolk, a uni-
verse that was about to become life (We eat,
feed, and are eaten)

It is important for me to acknowledge that I arrive at this book of poems with relatively little knowledge of Korean literature, apart from having read recent works by Korean-American poets such as Don Mee Choi, Emily Jungmin Yoon, and Franny Choi. At a poetry reading at London Review Bookshop recently, poet Bhanu Kapil asked of us, the audience: ‘What do you inherit? What do you reproduce?’ I find this a useful framework not only for considering my own position, writing from a different cultural time and place to these nine Korean poets, but also for considering the poems themselves. What do they inherit? What do they reproduce?

In ‘Time for Boiling Eggs’, time moves in a slow, circular motion, caught in a whirlpool, spiralling towards tender grief as the speaker feeds her mother, who does not recognise her. ‘(Memory eats, feeds, and is eaten)’, the poet writes, and a cycle of remembering, eating, and feeding emerges. The weight of the egg is the weight of memory; I can feel it heavy in my palm. I think of my own mother boiling an egg for me in the morning in the kitchen, always boiled just to my preferred consistency, and watching her slowly transfer the egg on a spoon from the pot to the eggcup. Kim Seon-U’s poem inherits loss, but it reproduces something more like tentative hope, ending on a note of calm.

The act of cooking and being cooked for resurfaces in ‘Mother’s Poetry’ by Choi Young-mi. A mother prepares food while the speaker dawdles, ‘playing with poetry.’ The vast emotional and physical distance between mother and daughter is apparent, but the very fact of this poem’s existence serves to bridge this distance in some way, since it’s the product of the daughter’s work of transcribing and transforming the movements of her mother’s hands into poetry. Like cooking, poetry sets off irreversible chemical reactions.

A daughter’s strand of shame, a mother’s strand of finely diced white cabbage for kimchi. The strands are woven together now. Like Kim Seon-U’s boiled egg, a mother feeds her daughter her own memories, her own finely-cut ‘tears and sighs’, and from them, the daughter weaves a poem. The food and the poem both come from women’s bodies, and will in turn be eaten by them. Memory eats, feeds, is eaten.

‘[T]he place where the body becomes anonymous, disenfranchised, or expelled, is where the language of death, women’s language, is born,’ poet Kim Hyesoon states in an interview with her translator, Don Mee Choi. Against Healing begins with Kim Hyesoon, who is one of the most well-known contemporary Korean poets outside of Korea. For her, the act of writing a poem is a bodily act:

So for me to write a poem now means to bear it all, holding the firefly-like death with a small breath while writing a poem.
(‘Fiction and Poetry’)

A breath held in the lungs, not yet exhaled. The poem is a body in flux. We might choose to read the speaker’s decision to emphasise nowness – ‘to write a poem now means to bear it all’ – as a nod to the contemporary reality of writing poetry as a woman in South Korea. In a room lit with violet light at Hayward Gallery in London a few months ago, I saw Kim Hyesoon and Don Mee Choi in conversation with Sasha Dugdale. As Choi translated Kim’s words, I hastily transcribed them in my Notes app on my phone: ‘I want to erase the language of men and replace it with the language of women, which is also the language of death.’ It was Choi Young-mi, mentioned above, who recently chose the medium of poetry to recount her experience of sexual abuse by Ko Un, an eminent older poet much-adored by the likes of Allen Ginsberg.

In Park Seo-won’s visceral poem ‘Seizure 2’ I’m reminded of Kim Hyesoon’s Autobiography of Death, Han Kang’s Human Acts and, to summon an example not from Korea but equally preoccupied with death and the body, Jay Bernard’s powerful debut Surge. All these works serve as elegies in some way, in which spirits watch the living go about their daily lives. Park Seo-won accesses a similar liminal space between dreaming and waking, illness and health:

I had the memory of the hospital with magnolia flowers fluttering in the April night sky
My father vomiting blood on a stretcher cart
He’s finally blooming red magnolia
Then, I was beginning to separate from many people

A magnolia tree appears on another page, in ‘Scarlet Letter’ by Kim Seon-U, which also occupies an in-between space. Violent imagery – ‘Those hands have cleaved my breasts and thrown them under the shade of a magnolia tree’ – culminates with another image of eating and rebirth:

The lotus petal would have thought: those who have shared and eaten my body will bloom me into flower.

The way the body can transform so easily and seamlessly in these poems reminds me of a photo I saw on Twitter of American poet Don Mee Choi performing her work Hardly War, in which the poet dressed herself in a traditional Korean hanbok made out of white paper, onto which images of the Korean War (taken by her father, who was a war photographer) were projected while she performed the poems. The body becomes the poem; the poem becomes the body.

Violence committed by men against women also haunts the poems of Kim Seung-hee. In ‘Mother Standing Outside the Door’ she mentions ‘the weekly rally in front of the Japanese embassy’, referencing regular ongoing protests by Korean comfort women and their relatives and supporters to receive proper compensation and recognition from the Japanese government. The poem feels like it’s in conversation with the translator Emily Jungmin Yoon’s own book A Cruelty Special to Our Species, which engages with the silenced histories of comfort women during World War II.

It’s increasingly common, but still not the norm, for East Asian literature to be translated by those who have also grown up within the author’s culture, or (in the case of diaspora authors and translators) in close proximity to it. Having read and loved Emily Jungmin Yoon’s work, I feel safe in this translator’s hands. Although there’s room in the world for many different translations of a single poem to exist, all of which can be ‘correct’, here I’m not left in any doubt of the translator’s ‘cultural fluency’, a term introduced to me by novelist and translator Jeremy Tiang. As a reader approaching the work from my own multilingual, multicultural perspective, cultural fluency is as important to me as linguistic fluency.

What this vital book tells us is that there’s no single form of ‘Korean women’s poetry’. We’re invited to read these poems both within their specific contexts and without, which I think is the mark of a truly assured, complex and diverse volume of poetry. The poems resist categorisation and explanation, but it’s in the work of Shin Hyeon-rim where I feel multiple threads converge: motherhood, food, death, and the body as a site of violent, beautiful transformation. Her poem ‘Abortion’ confronts a taboo subject within an inherited, centuries-old poetic lineage that has, until recently, been dominated entirely by men. Shin Hyeon-rim is not the only poet to touch on it in this book – Kim Yideum also. In ‘Single Mom’, boundaries are shifting, transforming. Flesh and skin are permeable.

Mommy can make a bowl of rice with her tears
Mommy can start a riot of hope
[…]
When I see you, I become an island
An island that swims the magnificent ocean called you

Nina Mingya Powles is a writer and poet of mixed Malaysian-Chinese heritage, born in Aotearoa New Zealand and currently living London. Her recent publications include Luminescent (2017) and field notes on a downpour (2018). She was one of three winners of the inaugural Women Poets’ Prize 2018, and was a finalist for the Sarah Broom Poetry Prize in 2019. She is the founding editor of Bitter Melon 苦瓜, a small press that specialises in limited-edition poetry pamphlets by Asian diaspora writers.